The novel Dracula is a blog. ‘Hmm,’ you’re perhaps thinking, expression understandably like the pondering emoji. But the gothic horror novel is written as a collection of diary entries, letters, ship’s logs and such like: personal reflections and recounts of events that day. A blog. So it seems apt, that as Youngest Offspring and I make our way once more to God’s Own Country, in my efforts to expose her to a little more of her Northern ethnicity, that we take in a performance of Bram Stoker’s Dracula at Whitby Abbey.

We arrived direct from the South West on a day that reassures you that you’re on holiday – sunshine soothing away the daily grind and offering up escapism and opportunity. 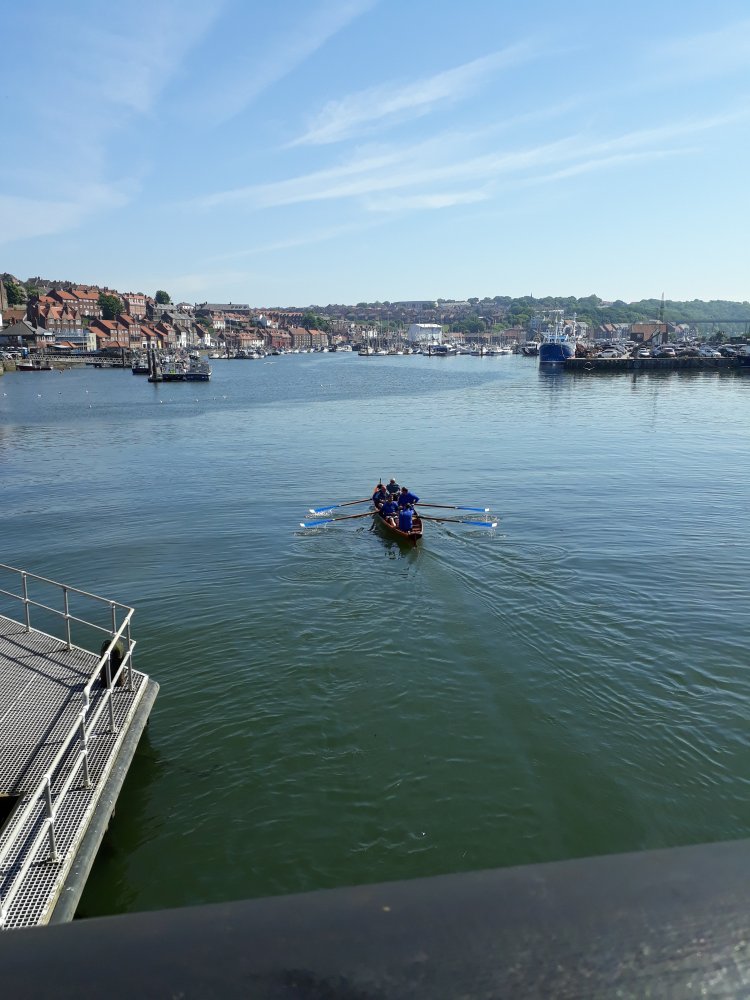 Friends were shocked that we were venturing to Whitby on a bank holiday Sunday. But  we parked easily and nestled ourselves into the Marina Front car park.

Bram Stoker (if you’re wondering, it’s short for Abraham) came to Whitby in 1890, looking for a holiday home (well, you do in Whitby). He stayed at the Royal Hotel, but it was whilst lodging at 6 Royal Crescent, a curve of beautiful houses reminiscent of those in Bath, that he wrote the play The Undead, which barely got off the ground, so he rewrote it as a novel: Dracula. He was filling time whilst waiting for his wife to join him – a wife who apparently turned down Oscar Wilde to marry Stoker. With Wilde’s later notoriety she must have heaved a sigh of relief, though Stoker died of syphilis, so maybe not….

The play was brought to life by a skilled troupe of three from Time Will Tell, who whipped in and out of the scenes as various characters (Dracula at one time looking decidedly like Elton John. Though in a good way.) 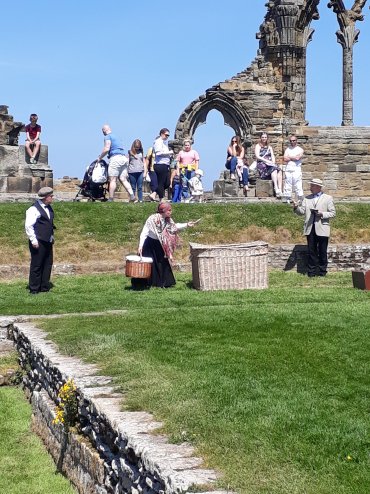 It was hilarious and true to the book; you could hear direct quotes from the text at various points. The humour was clever and playful, rather than childish, which can be the case with these compressed plays that try to appeal to all ages. And the audience participation was at, what I would consider to be, an optimum, un-panto level. I won’t pre-empt it by revealing all, as I think it’s something to languish in and be surprised by, but do not bring with you chairs and comfy cushions that you’ve made yourself, nor a desire to sit leisurely in the sun. The play moves you around the abbey, using the various backdrops to add to the intensity and atmosphere of the scenes. I moaned about this at first, having lugged furniture up the 199 Steps, but then appreciated the immersive aspect and found myself gazing at the intricate arches, which seemed to interlock like an Escher drawing.

As part of the entrance price, you get to mooch around the abbey afterwards (or before, if your time-keeping is of a better standard). And includes audio tours. If you enjoy tours maybe my blog about Robin Hood’s Bay Ghost Tour might interest you.

Growing up I thought the Abbey was just, well, kind of nice to look at.

Oh no. It’s important too. Pretty much like the whole of the North East, it has been invaded by diligent invaders – Romans, Danes, Vikings, and even the Germans shelled it in WWI. Founded as a monastery in 657, it was one of the most important religious centres of the Anglo-Saxon world. Mildly interesting , you might think. But, you see, it was ruled by a woman. An abbess. Hild or Hilda (I suppose it was Hild to her friends). She advised kings around the world, was supposed to be supremely energetic and a really rather nice person. A shame that it’s noteworthy that she was female and so influential, but we need to know about more women who have carved our history. Read about her. She’s interesting. There’s even a novel about her. And she died at aged 66, which is quite an achievement then. Whatever the year was.

The Abbey, owned by English Heritage, and Grade I listed – so don’t even think about trying to add a conservatory on the back – went into ruin mostly because of Henry VIII (the more I read about him, the more I think he was nowt bu’ trouble) and his Dissolution of the Monasteries. He snaffled all the money, stripped the buildings of the juiciest bits and sold them off at a car boot somewhere. Short-sighted. He should have kept it, and charged entrance. Maybe had a bit of Tudor merch.

The infamous 199 Steps take you back down to the heart of Whitby. Though some claim that it’s actually only 198, as technically the top is not a step, but just…the top. (Sigh. ‘Technically’.) And others claim that it’s 200, as there’s the step from the bottom onto Church Street. What is more important and indeed compulsory, is to count the steps as you go up. If you lose count there are markers every 10 steps, but really, if you can’t count to 199 then you really shouldn’t be allowed out the house.

The Steps, whose proper name are ‘Church Steps’ are quite rightly a Grade 1 listed heritage monument and were originally made of painted wood. A person, who perhaps needs a fuller life, is the person on Trip Advisor who wrote a review about his favourite step (No. 39. Maybe he was confusing it with the name of a book…) due to its texture and colour. Though maybe it’s me who needs to lead a fuller life, since I’m reading a Trip Advisor review about a step.

But oh! The views. That’s a real reason to climb the steps.

We carried the folded furniture back down, glad that Bram Stoker’s ‘blog’ Dracula had become an international bestseller, that it had therefore helped bring wealth back to an abbey that was once one of the richest monasteries in Yorkshire. Glad because there were now lots of places to go get fish and chips….