A mist coming in off the sea; a sea fog

There are some things that you only hear in the North. And some things that you can only experience in North Yorkshire. Robin Hood’s Bay, carved into the Heritage Coast, is by day, stunning. By night, mesmerising and unsettling, in a way that only a northern fishing village can be, especially when engulfed by a fret.

On a damp Wednesday night, I took Youngest Daughter and her two friends to the notorious Robin Hood’s Bay Ghost Walk. The mood was set already by the thick and heavy fog which spread keenly across the North Yorkshire moors, collecting in uninviting, dense masses where the road dipped and turned. Darkness waited eagerly at the edges of our peripheral vision, with a sharp chill by its side. We passed Whitby with its haunting abbey relic, and drove 5 miles on.

As you wend your way to the village, the falling light adds a dangerous hue to the roiling seas and rugged landscape. You feel you’re in the only place in the world and have stepped back in time. Vehicles are banned from the harbour area (but the car park is inexpensive), no cashpoints, no chain food outlets. All as it should be. A village preserved. 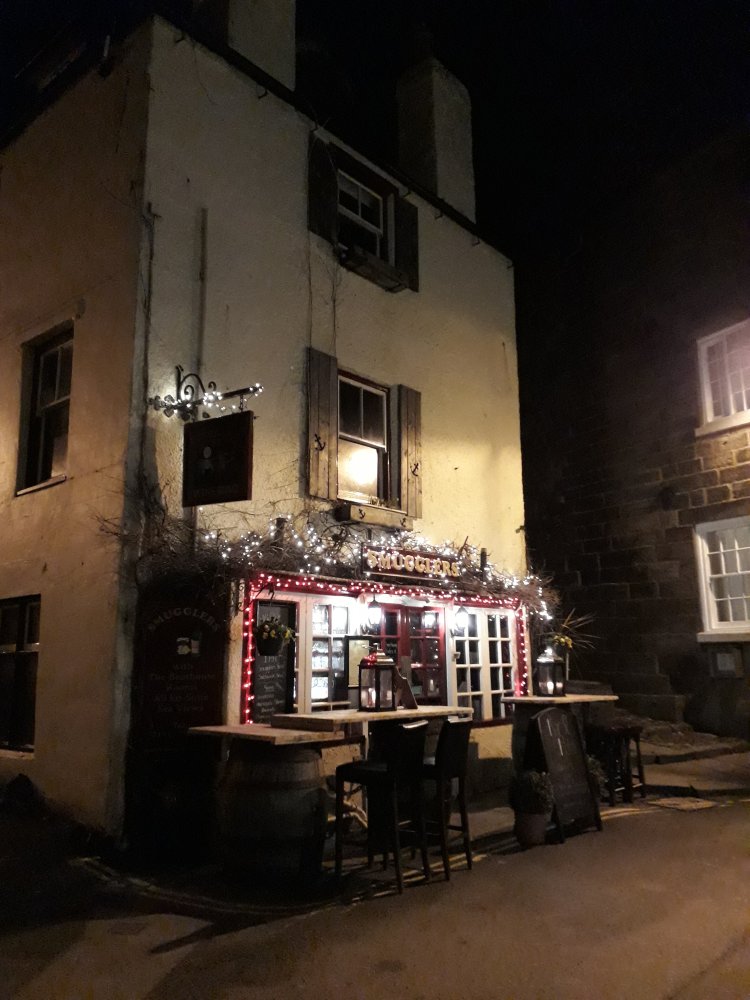 Down the steep lane towards our meeting place at the Old Coastguard Station, at the Dock (now a National Trust Visitors Centre), I was sure we’d be the only ones on the tour. But family by family, couple by couple, person by person we gathered slowly, nodding at each other, grim smiles acknowledging the cold, until we were almost 30 in number by the designated 8pm. No one knew who to pay or where our guide was, til a smudge of light, bobbing left to right, approached us. A lady in a short, black top hat and heavy, long, black coat, gripping a lantern, formed an eerie silhouette on the cobbled lane down towards us.

Rose greeted us warmly. A warmth we took gladly. She in turn took only £3 per child and £6 per adult. We hadn’t booked; it isn’t required. Her Ghost Walk took us through the maze of narrow streets and alleyways meshed together, like the branches of gorse on the moors.

She stopped us at junctures to tell us compelling stories of the village, historical facts of love and loss, of gruesome deaths, those fallen from the clifftops, sailors swallowed by the sea and regurgitated back upon the shore. For just over an hour we were entertained and informed.

We learnt how smuggling was rife on the Yorkshire Coast, especially when Robin Hood’s Bay was a more important port than its neighbour Whitby. The village houses the once headquarters of the smuggling kings, who used tunnels beneath the buildings to secret their loot.

The gruesome was entertaining, but the ghost stories disturbing. Robin Hood’s Bay is one of the most haunted places in the country. Well documented are encounters with those who’ve passed over, poltergeists and always worst – child ghosts whose reflections are seen in mirrors. By day you might laugh and shrug. By night, with a fret hanging heavy, you walk with a slightly quicker step.

It’s little surprise that Rose, a skilled storyteller, has her Ghost Walk listed as one of the UK’s top 11 Ghost Walks by Trip Adviser and has been featured on BBC Radio 4 and Channel 4. And she herself is an interesting person. If you get a chance to chat to her as you make your way round the village, you’ll feel her passion for where she grew up and the planet as a whole. She is currently heading up a campaign against littering the countryside and will again feature on TV. We need to make more space in the world for people who have positive passions and can bring ideas alive. She most certainly brought this jewel in North Yorkshire’s coastline alive for us. There are some things that you can only experience in North Yorkshire. Even if there is a fret.